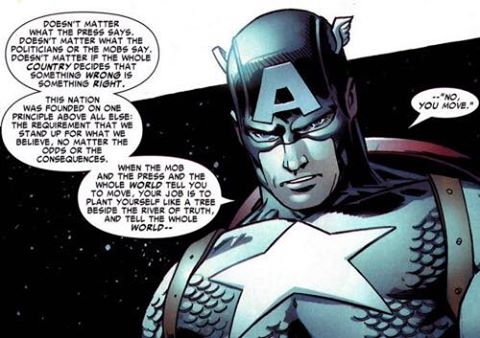 This quote from Civil War has been stuck in my head recently, and I think it will soon be getting tattooed somewhere I can see it.

One of the big things that’s been going around recently is “Be kind, be the better person, be forgiving”. Well, I adore Michelle Obama and think she is one of the more amazing people alive, but this is what got us here. We’ve bottled the fear and shame and anger and put nice smiles on our faces and moderated our voices and begged for safety, equality, understanding.

Tonight we proved that doesn’t work. Even if by some miracle Clinton pulls through, we’ve proven that half the voices in the nation are screaming hatred and violence. They want to see us burn, literally, in too many cases. No matter what the outcome, the mask is off. We’re exposed, weak, and divided. We’ve lost.

Maybe that’s a good thing. We’ve been able to claim innocence. Surely people are good. Surely the nation isn’t really *that* bad. We’ll get through this. Well, actually, no. They aren’t good. We aren’t innocent. We are *that* bad, and it’s long past time we all had to look our demons in the eyes. It’s time we stopped being nice to those demons.

Like Bruce Banner, we’ve always been angry. We’ve swallowed hurt, rage, fear, and grief. We’ve taken the leavings, and thanked people for allowing us to live. We shrug weakly and make jokes about the grinding, endless fear we live under because that’s what we’re supposed to do, because any time we talk about it, we get shouted down as whiners, PC apologists, entitled little slackers.

*We’ve always been angry.* It’s time to plant ourselves and make them listen, whether they like it or not. Black, white, Asian, Latinx, LGBTQAI, straight, Christian, pagan, male, female. It is long past time for the quiet, nice voice to roar, to command change. White feminists, white men, this is on us more than anyone, because we’ve been leaving everyone else behind for way too long. Everyone moves forward. No one is left behind.